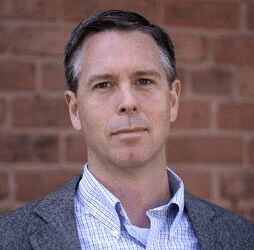 Integrity First, Service Before Self, Excellence in All We Do. The Air Force Academy motto has defined Chad’s approach to life since he was a cadet there. After flying reconnaissance missions as an Air Force pilot for 10 years, including combat and combat support missions in Afghanistan, Chad left the military and studied law at Stanford University.

Chad and his family moved to Cincinnati because he was provided the opportunity to work in the litigation department at one of the largest law firms in Ohio. After several years, Chad began working with a healthcare employer, helping them to manage personnel and employment issues, and gaining critical insights into how different companies treat their workers, pushing them to do the right thing.

In 2015, Chad took control of the legal functions for a local Cincinnati biotech start-up and oversaw the growth of the company from 5 to 55 employees. As general counsel, Chad ensured his company treated their people well. He supervised employment legal processes, pushed his company leadership to invest early in human resources personnel, and established equitable policies and practices.

Now as a member of Gibson Law, LLC, Chad brings his commitment to excellence, a strong sense of fair play, and substantial legal experience to bear for his clients. Chad has experience representing individuals in a wide-range of claims against their employers and helping them recover the damages they deserve.

Chad represents individuals in claims involving wage-and-hour violations, discrimination in the workplace, unlawful retaliation, harassment/hostile-work environment, failure to provide medical leave, and much more. Having seen employer decision-making from the inside, Chad knows there is a right way to treat people and a wrong way. For his clients, this clear vision makes Chad an effective advocate for their legal rights as employees.

Learn more about how Ohio attorney Chad Clark can help you with your legal matter. Contact our law today.